RSS
← Summer of Pain (aka Hold on to Your Asses)
Bitch Are You Sleeping In My Class?! →

Notes from the Road I: Watch this, bitches.

So four weeks (virtually to the day) of being sawed in half by a very talented surgeon(1) I was allowed to get my Frankenstein monster scar wet (i.e. dip in a pool) although not exercise.  I was also allowed to drive, lift things less than 20 pounds, and eat and drink whatever I wanted. This sounded like the perfect opportunity for Otter and me to hit the road, eating and drinking our way across America. He was thrilled.

Two years ago, when he was only 6 months old, we drove from our home in NC to Milwaukee, Wisconsin, to visit my bestie and brother, Golden Boy.  Golden Boy, for those of you not interested in archival research on the memoir front, is my older brother, who (while we were growing up) set impossible standards, especially for a fuck up like me, to live up to.  We had, in short, what we both thought was very little in common. (Turns out we were both wrong.) He has since fallen out of grace, as it were, with Hurricane (ref: our batshit crazy mother) and we, in our adult lives, have become the best of friends.  Indeed.  In hectic weeks, I will talk more with GB than I do – or even see – Hubby. GB, his wife, and his 2 fabby daughters live in the Land O’ Cheese. 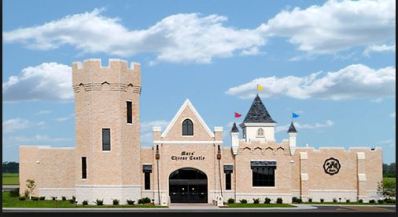 I typically stop for the World’s Biggest Ball of Twine type items while on the road.  I’ll even make detours for them since these are the places you meet the people that make America great.

Yelladog made that same road trip in his last year of life and the GB’s girls lavished him with the purest of affections that only they can give. My brother’s oldest (ANGEL) is predominantly wheelchair bound, being the survivor of a horrible childhood infection that almost took her from us.

Yelladog and Angel – both living miracles, with hearts so big that it made their mobility issues seem very small.

It was time for the new generation of pup to visit.

The first trip, Otter weighed approximately 40 pounds.  He had basic commands (in as much as he has them now anyway) under his belt.  And was completely housebroken.  In addition, he had learned that when the top goes down on my car, the Doggles come out and Otter’s Big Time Happy Fun Fun Adventures begins.

The Doggles are only needed when the top is down.
I never worry about debris flying into his eyes at 80+ miles an hour.
And it makes people take his photo (he poses) and come pet him (Otter Heaven).

Otter loves riding in cars so much that he had taken to jumping into ANY car that rolls into the driveway and opened a door.

He tried to go for a beer run with a girlfriend at our Kentucky Derby party.  He once jumped into the open trunk of Hurricane’s Honda while she was trying to unload it. And jumped into a UPS truck, whose driver eyed me as if Otter might be an abused dog trying to escape.  Evidently I have that crazed look about me of a Tuesday afternoon day drinker. *sigh*

Now Otter is full grown at 70 pounds of Solid Muscle; meanwhile, I’ve been sawed in half, stitched back together and he’s stroking out a little watching me load the car at a geriatric pace.  He may break a hip wagging his ass he’s so excited.

We have tech and maps for our 18-day road trip that involves Dayton, OH, Milwaukee & Green Bay, WI, Kansas City & Lawrence, KS, Nashville, TN, and then back home for 48 hours before Otter and I hit the beach at Wilmington, NC.

And yes, bitches.  I mean maps. As in the paper kind. Hubby said it must have been fun hanging out with all of the senior citizens at AAA while getting all my free maps.  But I love a paper map.  I love the smell of it, fighting to fold it, searching for my GPS with my index finger, stopping to look and have a drink and a stretch and chat with total strangers.  Hubby thinks that the 1950’s called and wants its Route 66 mentality back.  Fuck him.  He’s just jealous that he works for Asshats who give him no vacation time and therefore he can’t come along.

Packing is a science and I am good at it.(3) In addition to all of Otter’s gear (bed, food, seat belt harness thingy, Doggles, chewies, leash) I have packed clothes for 10 days, including swimwear(4) two cocktail dresses (game day decision for a wedding in Kansas) a cooler for roadies and waters, sunscreen, spare TP, an inflatable mattress with linens, a pillow, cases of Cheerwine, assorted NC goodies for GB, a box full of pressies for his girls, homemade Kahlua for his wife, my 9MM, and no less than 6 pairs of shoes.

Hubby and GB are worried about me.  What if Otter gets a bee up his furry butt or suddently decides to chase something small and fast at a rest stop?(2)  What if I have abdominal pain? What if I hurt myself somehow and am stranded in the middle of West Virginia?  (I am going through no less than 7 states, but both men cited West Virginia as the site of my fictional stranding.  Interesting.)

And my response to this is the typical Tomboy Debutante one: 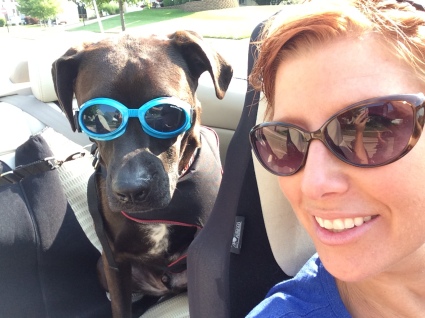 A selfie before we hit the road.

(1) A surgeon of my choosing Fuck you very much BlueCrossBlueShield

(3) Hubby sucks at packing the car. Unless he’s going hunting.  Then he turns into fucking MacGuiver and his brain suddenly has the capacity to figure out what can fit inside of what in order to sit just right so that the cooler is within roadie reach while propping up the deer stand so that nothing rattles and you can still see out the back window.

(4) THAT was a fun chore.  No one over a size 6 likes shopping for a swim suit in fluorescent lighting dressing rooms. AND having a (very recent) 9-inch scar across your abdomen makes getting in and out of clothes a virtual feat of strength and agility  I have soreness in ab muscles that I didn’t even remember having, since I’ve not used them since my 20s.  It took me 4 hours at the Macy’s End of Season sale in order to purchase a Granny Swimsuit that is relatively comfy and properly hides all of my scars.

Posted by Derelict Deb on September 21, 2014 in BLOG DEPOSITS

← Summer of Pain (aka Hold on to Your Asses)
Bitch Are You Sleeping In My Class?! →