RSS
← Mackula – All Hallows Is a Family Tradition
Green Machines, Purple Ultra-Suede Suits, and the only Barbie Doll I ever owned: Christmas as a Tomboy Debutante →

Wag On, Yelladog. Wag On.

One year ago today, Yelladog died.

He left our lives the same way he came in.  Unassuming, steady, and quiet, as if he’d always been there and we’d only just noticed.  He was a monstrous dog, part Great Pyrnees part yellow lab, all sugar, weighing in at about 120. He was a great old man and I miss him.

He appeared one day while I was pulling green beans in our garden; my granddad had died two winters before and we’d been living in his house in the mountains, renovating it (between desperate attempts to flee it).  Yelladog made sure I saw him first and he just watched me, being careful not to frighten me, staying about 20 yards away at all times.  It was hot, so when I got to the end of one row, I went in for a drink and brought out a bowl of water for him. 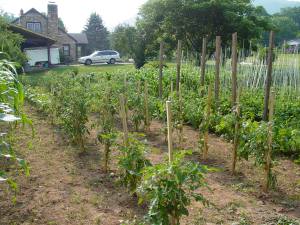 A photo of our Crazy Ass Garden.  Almost 1/2 Acre of Lost-Our-Minds.
This was the start of our second season; by the time YD arrived, all 42 (I said 42 bitches!) tomato plants were bursting with produce. (You can see the strings and bean behind those…)

He would visit on lazy afternoons and weekends, often literally moving with me, yard by yard, up and down the opposite side of a garden row, never interfering, never begging, always watching me with his steady big brown gaze and slightly tormented expression.  His limp gave a pronounced staccato to his walk and he grunted slightly, when he sat or rose gingerly to his feet.  I told Hubby about my furry garden companion, this random Yellow Dog, and eventually they met. But we had enough troubles; Hubby didn’t want a dog.  He was clear on this point. 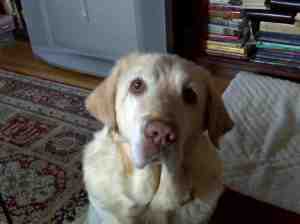 Really?  Could you say no to this face? If you said you could, then you are a Bastard, and I’m not sure you should be reading this blog anymore.
Consider yourself on TBD Probation.

The Yellow Dog and I built a special report.  He came around on weekends only at first (we never knew where he went Mon-Fri) and after a few weeks, he let me pet him.  I could see bloody knots under his chin, and a wicked scar that cut into the left side of his muzzle; I worried he’d never really trust me. 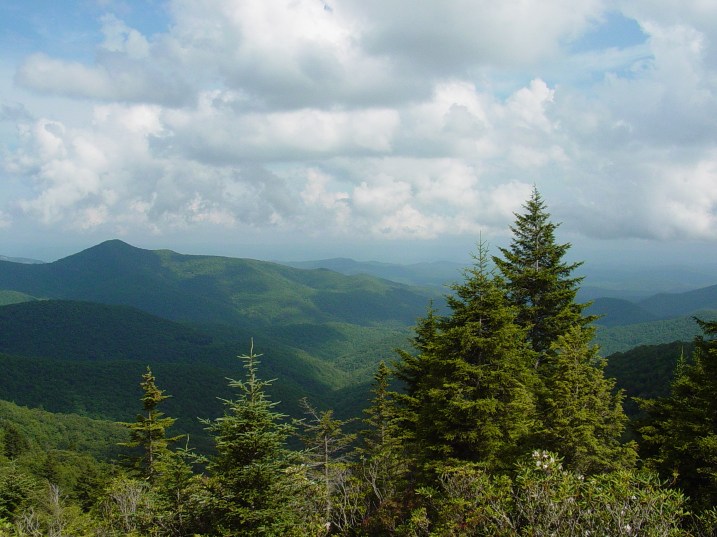 O Those amazing Smokies, and the abyss from which Yelladog magically appeared.

Indeed, the more I learned about him, the more I made connections between he and Val, a man I had loved dearly.*   A torn ear, what looked like a knot of blood or mud under one front leg, some missing fur on his haunches (mange?) and some jacked up redneck teeth were all a part of Yelladog’s old man charm.  Likewise, my granddad Val had had more than his share of scars, not the least of which were surviving Guadalcanal in WWII and more than 60 years of marriage to Evie, who was batshit crazy and abusive.   Despite that, though, almost pointedly so, Val and YD remain the kindest souls I’ve ever met.

When no one claimed him or responded to my flyers, I armed myself mentally to battle with Hubby over adopting the large beast.   He was on the back deck, grilling, when I got home from work, with Yelladog about 8-10 feet away, which had become his usual distance. Hubby makes Killer Burgers, the sun was shining with Indian summer warmth on an early October afternoon in the Smokies, and the color off of Cold Mountain behind him made me pause. Not really the scene for a canine confrontation.

“Mmmm Burgers.  I love your burgers baby, “ says me, with a kiss.

Immediately one eyebrow goes up.  Hubby is no fool.  “Uh huh.”

“Sure,” Hubby says. “Our dinner is on the counter.  Can cook it whenever you’re ready.”

I step inside, pour myself a glass of wine (Hubby has been home a while, the bottle is already half empty) and only then do I notice the Pyrex dish on the kitchen counter, with salmon marinating.   I slide open the deck door forming a question, the answer to which is:  Damn I Finally Married Well.

But the plate is already in front of Yelladog, who is eating greedily, happily, his geriatric hips wagging so hard, I think he might fall over. Hubby drains his glass and grins at me. Damn I Finally Married Well. 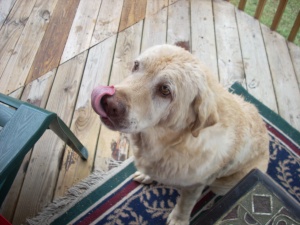 Yelladog after devouring a Killer Burger.

The one and only bath we ever gave Yelladog ourselves revealed big hunks of missing fur, some tender knots under all four legs, and cuts on his pads.  It also resulted in 7 ruined towels, 1 whole bottle of Suave shampoo, ½ bottle Pantene conditioner, the disposal of all the clothes we’d been wearing, a ball of fur large enough to constitute 3-4 dead guinea pigs, and demanded a total renovation of the downstairs bathroom when we were done.   Hair dryer, though?  No problem.  His hips loved the heat.  Being relegated to sleeping in the foyer? Also, No problem. **

I loaded Yelladog into the backseat and I took him to the vet.  Car?  No problem.  Traffic noises?  Parking lot? No worries.  Doors to the vet?  Hell No.

It took three grown men to get him through the doors, and he shivered and shook from the terror.  I sat in the floor with him and he tried to ball into my lap, crushing my hips into the tile floor and seemingly dislocating my shoulder. I was in tears when I left, the sight of leaving him there was too much.  They called 3 hours later to ask to keep him overnight, they wanted to run more tests.  I couldn’t sleep for thoughts of humane euthanasia.

I didn’t wait for another call.  I was there when the vet techs arrived in the morning, on my second cup of coffee, listening to Led Zeppelin, staring at the door, and waiting, just waiting for someone to not give me back my dog.  A Tomboy Debutante has an inner compass, that when switched to KickAss, can be hard to control.  I had to wait until 9:30 for the Doctor, but Yelladog was cleaned up, albeit shaved in spots, and ready to go. I had to dial back the KickAss. Better yet, I still don’t know who was happier to see whom. 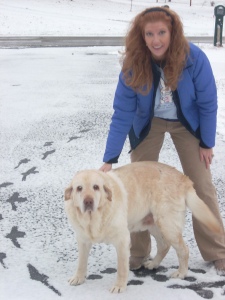 Yelladog, on the first light snow after his Adoption.  He was accustomed to life by the fire at this point, and as you can see, none too pleased about this photo op.

Yelladog (Official spelling, thanks to the redneck Vet Tech, Bless Her Heart) was never more than about 6 feet from me from that day on.  The vet had 13 pages of catalogued abuse on Yelladog, including cigarette burn scars on his forehead and scars where hot oil or fire embers had been thrown on him, burning his back and haunches.  She was eager to prosecute someone, but who?  Yelladog had literally just appeared one day.  He would sit, stay, come, all on command.  He was neutered.  These things don’t happen in nature; he’d been someone’s pet once.  But the long term damage to his teeth and paws said that was a long time ago. ***

At adoption time, Yelladog was (best guess) 9 or 10 years old.  And he retired in style, living with us for 5 full years.  He was sheltered, and fed, every now and then bathed and trimmed.  He got chewies for Christmas, bones for his birthday (we picked April), Killer Burgers every spring and summer, and he was so very loved.

He died on Thanksgiving morning.  I had a house full of family, a fridge full of food, and a dead dog in the kitchen floor.   There was no pain, no suffering, no mess.   He just breathed in and breathed out and was gone.  The way I want to go.  The way my bestie, Merilyn, had died just 30 days prior.  She loved the mountains; I like to think they are included in each other’s version of Heaven.

Hurricane was in residence. Her new hubby’s dog Fred had been playing  with Yelladog happily the night before.  No harbingers of any kind. She went hysterical when she found out, God love her.  And then she GI’d**** the kitchen while we drove him to his last vet visit. Cause you can’t control a Hurricane, people.

The most heart-breaking?  Hubby.  He had never had a pet growing up, and Yelladog was in many ways his first real one;  though there had been some college dogs in his life, none had the spark or longevity or connection of our Yelladog.  He was wracked for days with sadness.  Sadness we hadn’t felt in a while; sadness we’d almost forgotten.  The sadness of real loss. Yelladog had come into our lives when we were mourning the loss of our lives in Texas, the loss of jobs and a life we adored, the loss of babies, and a new wretched year of family crisis etched in hard mountain winters.  And he had seen us through all that to better places, better faces, better days.  All with his steady gaze and loving canine ways.

According to the shelter where we adopted Otter last February, he was born on Thanksgiving, or damn near. Coincidence?  I think not. I think Beshert.****

I like to think that this canine timing is to remind me that all passages of life should be marked with episodes of your happy, not with a focus on your sad.  It’s a fucking choice, people.  You can decide to look for the enriching, the hopeful, the humor, or you can grab on the negatives in reality and let it run, maybe even ruin, your life.  I used to get so angry when friends would choose to ride along on The Martyr Express, or its partner locomotive, the Boo-Fucking-Hoo train.  But there is plenty of crap in this life and it can be overwhelming.  I’ve taken day trips; we all have.  The goal is to find an interesting stop and debark for a while, not take up residence in the damn dining car.  Give it a try; you may find a sunny destination, a cool idea, an amusing job, a yella friend.  Sometimes you just have to pick your head up out of your ass (or the green beans) to see it.

We all have tragedies in our lives.  But Yelladogs everywhere are reminders that we should not allow ourselves to be defined by them.  Wag On, Yelladog, Wag On. 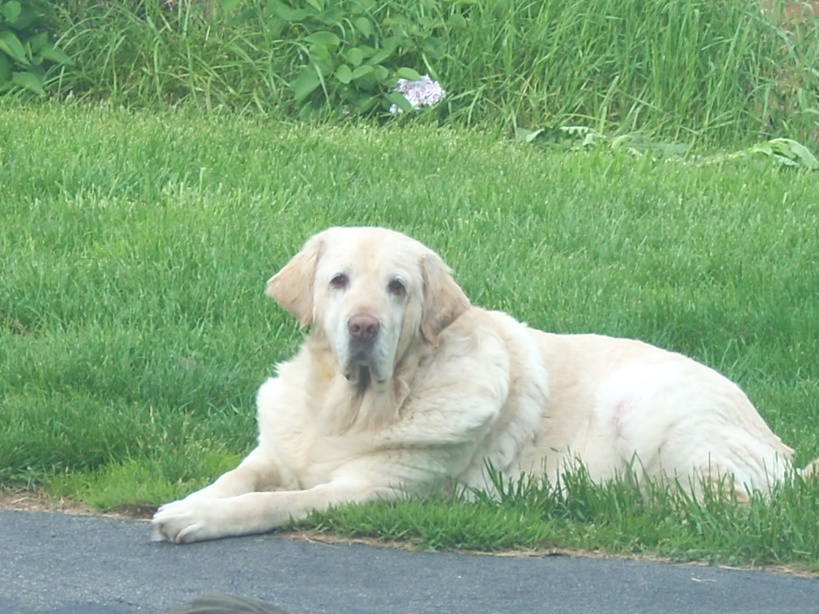 * Living in his house was hard in many ways, mainly because we should’ve sold that piece of shit for scrap and moved; living there broke us financially.  But the sun on my shoulders in his garden in Julys and Augusts were often truly heart-breaking.

**Yelladog’s arthritis hips meant he could not climb a flight of steps.

***The surgical extraction of FOURTEEN teeth would later make YD the most expensive free dog ever.

**** For those of you from non-military families, to G.I. (as a verb) something is to clean the hell out of it, in preparation for military inspection; “the soldiers GI’ed the barracks” or “Hurricane GI’ed my kitchen that day, as beloved or not, a dead dog is not sanitary for her Thanksgiving meal prep.”

*****Loosely, Yiddish for destined to be

Posted by Derelict Deb on November 25, 2012 in BLOG DEPOSITS

← Mackula – All Hallows Is a Family Tradition
Green Machines, Purple Ultra-Suede Suits, and the only Barbie Doll I ever owned: Christmas as a Tomboy Debutante →